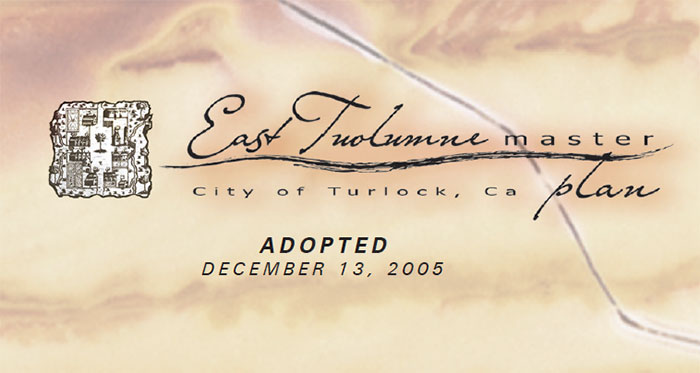 The East Tuolumne Master Plan, initially adopted in 2005, encompasses approximately 100 acres of land designated in the Turlock General Plan for very low density residential uses (up to three dwelling units per acre) along East Tuolumne Road between North Quincy and North Waring Roads. The East Tuolumne Master Plan is an implementing tool of the Turlock General Plan that is intended to provide a more thorough analysis of the project area to assess land use, circulation, infrastructure and financing issues prior to annexation and development.

In addition, the intent of the Master Plan is to provide a smooth transition between the more dense residential development to the west and the more rural / agricultural properties located east within the County's jurisdiction, as well as establish a distinct eastern edge for the City. Through the establishment of development standards and design guidelines, the Master Plan will provide the framework to create attractive residential neighborhoods along the City's eastern edge that are rural in character, yet cohesive in design. Individual residential lots will be characterized by large estate homes, a variety of lot widths, traditional architectural styles, large setbacks and open fencing.

For questions about master/specific plans and design guidelines, please contact: